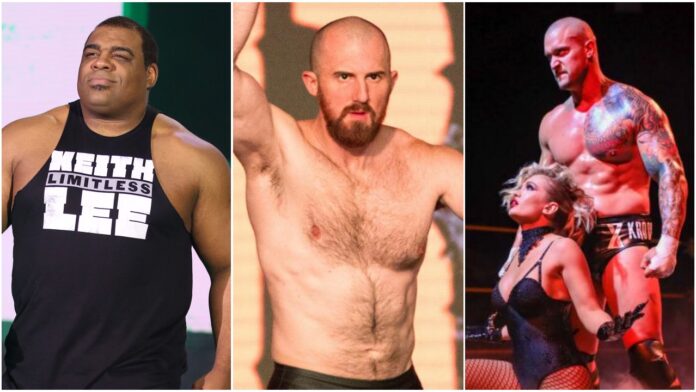 Yet another wave of WWE superstars have been released, and immediately the question beckons, who will end up in AEW?

AEW has become a true alternative to WWE, and it seems like Stamford is no longer the place to be.

It only makes sense for people to start speculating who will be signed by AEW, with many big names becoming All-Elite.

It will still be a while until we see these names again, as 90-day non-compete clauses are in effect for those released from the main roster. Meanwhile, those from NXT have 30 days.

The first two names that come to mind are Keith Lee and Karrion Kross.

Starting with Keith Lee, the Limitless one has become a fan favourite due to his in-ring work.

Just as nasty as I want to be. pic.twitter.com/yltxwxinSB

A big man that moves like a cruiserweight, Lee had a good start to his main roster career after leaving NXT.

The former NXT Champion became a feature name on RAW during the backend of 2020, before taking time off due to illness earlier this year.

He recently returned from his health scare, and was saddled with a new gimmick and name change. He was now going as Keith "Bearcat" Lee.

Fans had become quite restless with WWE's use of Lee and may be excited by the prospect of seeing him in AEW, where his in-ring work would be much more appreciated.

The big Texan is engaged to fellow wrestler Mia Yim, who was also released today.

Yim, has had quite the wrestling career, but never got the ball running in WWE, with her main roster run coming as part of the much-criticized stable Retribution.

If Lee is to sign with AEW, his fiancé Yim may follow suit, or perhaps she'll return to Impact and sporadically appear in AEW. Further opening the "forbidden door".

The other major name released, Karrion Kross would be a massive get for AEW. The former Impact star may be tempted to return to the promotion but a step to AEW would be a huge opportunity to prove WWE wrong.

Fans were also let down with Kross' time on the main roster, perhaps even more. Again, through no real fault of his own.

The two-time NXT Champion moved to the main roster and lost to Jeff Hardy in quick fashion on debut.

This was while he was still NXT Champion, and it damaged his credibility quickly.

WWE removed much of the theatre from his entrance, gave him different gear and even took away manager and fiancé Scarlett Bordeaux from his act.

Kross never had a shot on the main roster after that.

During his NXT run, Kross alongside Bordeaux became one of the hottest acts in the business and jumping to AEW might re-light the flame that had been put out.

So @WWEKarrionKross & @Lady_Scarlett13 get to be a duo again - and whoever picks them up has one of the hottest acts in the biz.

Unfortunately, it seems @WWE is sometimes intent on trying to reinvent the wheel. pic.twitter.com/NPOE6AL9xW

A good comparison to Kross would be Malakai Black in AEW.

Black, formerly Aleister Black in WWE, also portrays a dark gimmick and has shown that fans in AEW will get behind you, despite losing your spark in WWE.

Just like Lee, Kross' partner was released, and it is likely we see her wherever Kross ends up.

Among those, we could likely see Oney Lorcan join AEW, given he's more known for in-ring work rather than character.

Many names in AEW have been given the platform to allow their actions to speak for them.

AEW's woman division has often been criticized to have less star power compared to WWE, or even Impact.

Names like Ember Moon and Franky Monet (Taya Valkyrie) would be welcome additions. Their experience would help a division full of young names.