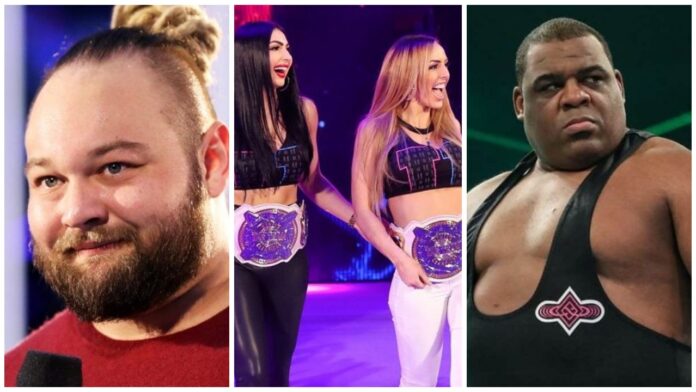 The past couple of years have been a unique period for professional wrestling, with the combination of AEW’s formation and emergence, WWE’s culling of talent, NJPW’s increasing acclaim, and the fall of ROH.

It’s not hyperbole to say that wrestling is as hot as it’s been in the past 20 years, with a continued trend upwards as 2021 winds down.

However, with the recent host of WWE releases over the past few months and the sudden folding of ROH, there now remains a surplus of talent available for

While it’s been a popular trend to speculate who’s going to AEW, other promotions like NJPW, MLW, Impact, and the NWA still serve as viable options for many (in addition to the Indy’s).

However, wouldn't it be fun to ponder who would make the jump to a brand new promotion if one were to start up in order to capitalise on this talent surplus?

The following list will account for the top 20 free agents (male and female) to start a new promotion with.

There's no one in pro wrestling who can do what Keith Lee does. A genuinely giant man who glides effortlessly in the ring. He can work every style from the typical 'big man' to lucha libre and has a unique cadence to his promo's which further help him stand out.

I may not have seen this if it weren't for Mr. Casey.

Thank you. This is friggin incredible!! https://t.co/wo4eMOpXU9

Kross carries a legitimacy that many try and mimic but often fail to conjure in the worked world of pro wrestling. His intensity, both in-ring and on the mic, helps establish him as a legitimate star.

Similar in likeness to Keith Lee, Rock carries himself with the infamous Aussie battler spirit, as he's able to combine power moves with hints or high spots and a solid technical ability.

Mathews could be one of the most underrated wrestlers in the world. He hasn't been able to display his full potential on the mic thus far, but he more than makes up for it with his combination of high flying, striking and technical ability.

One of the most exciting high flyers in wrestling, Bandido is more than capable of moulding his style to his opponent's in order to work thrilling bouts that leave fans on the edge of their seats.

Slex hasn't had the greatest opportunity to highlight his skill set to a wider audience, given the ongoing impacts of the pandemic, but the Melbourne star is amazing on the mic and has all the physical tools to go in the ring.

Like Slex, Brooks hasn't had a fair go of it as of late but is a tremendous worker who epitomises the modern style of wrestling popularised on the indies.

EC3 is like a swiss army knife. He's able to work an effective style, cut a captivating promo, and has all the creativity to get most of his heavily stylised gimmicks over.

Gresham is a technical wizard who wrestles a style not so common to the average fan. He carries a legitimacy that casts him in the light of a martial artist- Gresham doesn't 'perform', he fights.

Perhaps the most creative man in wrestling, Wyatt has plenty to offer given his track record for reinvention and getting the 'supernatural' gimmick over in the modern age. What further sets Wyatt apart is his in-ring psychology, which he freely adapts to any of his given personas.

Bordeaux is brilliant at playing the evil yet seductive heel and comes across as a genuine star. Her character work is great and she is quite capable of holding her own in the ring.

Officially free to work in 30 days!

Valkarie is a great heel who can turn the crowd when on the mic, and has a knack for bringing her gimmick to life. She is fearless in the ring and is excellent at working physical bouts.

Moon's athleticism sets her apart from a majority of her peers, as she combines a physical smash-mouth style with bouts of high-flying. She's believable in the intensity she portrays which gets the fans behind her.

Yim's gangsta persona is refreshing and different when comparing her to many of her contemporaries. She works a hard-hitting style with an angry swagger, which she carries over to her promos.

Martinez is a well-travelled veteran who carries herself like a badass. She's capable of working multiple styles and always seems to feel like a legitimate threat no matter the circumstances surrounding a given match.

11/12/00 WATERBURY, CT
Had my 1st match EVER only after 4 weeks of training under JASON KNIGHT.
To expand my knowledge of this business, I was & still am, mentored by the WILD SAMOAN Afa Anoai (whom I call POPS). pic.twitter.com/mTuTw9axLp

Rok-C is extremely athletic and has a tremendous array of innovative high-flying moves in her arsenal. She comes across as very likeable and the quintessential babyface who everyone can rally behind.

Kay has to be one of the top female wrestlers going around, and the fact that she remains unsigned is borderline criminal. She is able to work an extremely technical and hard-hitting style that not many can match.

Green is good at portraying her gimmick and wrestling within the parameters of it. She was made a free agent prematurely, having not been able to show her continued improvement due to a run of injuries.

This is kind of cheating as The Iconics are a team, but technically not because they're inseparable. Royce and Kay exude a type of electric energy and are great at manipulating and entertaining any crowd they come in contact with.

Alize comes across as a legit bully, hard and vicious with her opponents. She is a ferocious striker who moves well in the ring and isn't afraid of taking some chances when the opportunity presents itself.