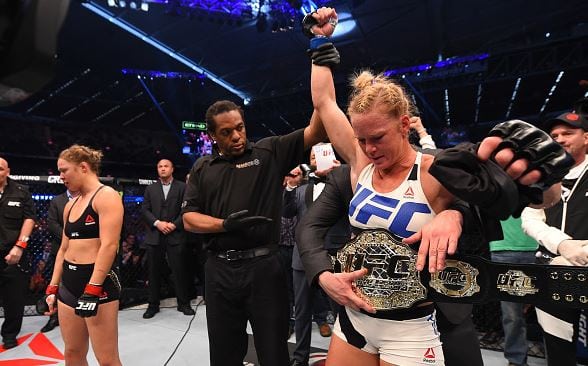 In the world of professional wrestling the results are predetermined. It’s all a show in the name of entertainment

But now, in a wild conspiracy theory, a former pro wrestling champion has claimed the UFC might have pulled a WWE on Sunday.

In front of more than 56,000 fans at Etihad Stadium in Melbourne, Ronda Rousey suffered a shock knockout loss at the hands of Holly Holm, her first UFC defeat and the end of her bantamweight championship reign.

But according to former WWE superstar and two-time world heavyweight champion turned podcaster Taz, the loss to Holm was what they call in the wrestling biz ‘a work’. In layman’s terms, Taz claimed Rousey deliberately lost to Holm and it was all part of a strategic plan, working in with Ronda’s increasingly packed career schedule.

“The first thing that jumped out at me was, OK: I think the finish of the fight might have been rigged,” Taz said on his podcast, The Taz Show.

“This has been done in the wrestling industry for years. A guy or girl is going to take a break or go away, or has an injury that they have to tend to, whatever the reasons are, and they’re a champion – you take the championship off of them."