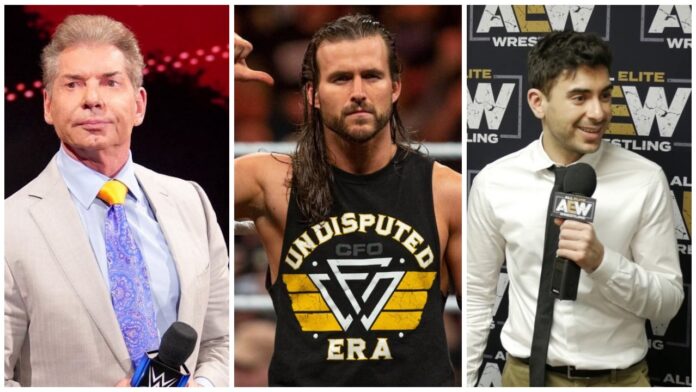 The biggest story in the world of professional wrestling right now is that of Adam Cole and whether he'll stay in WWE or move on?

Cole is arguably the greatest ever NXT superstar and is the longest reigning NXT Champion in the brand's nine year history.

Adam Cole’s contract with WWE has officially expired. It technically expired a while back but Cole penned a short-term extension to finish his feud with former Undisputed Era teammate Kyle O'Rielly.

Adam Cole didn’t have a non-compete clause in the extension so would be free to work anywhere after today.

Vince McMahon “definitely” wants to keep Cole and have him on main roster.

People close to Cole have said he hasn’t made a decision yet.

WWE officials hadn't realised Cole's contract was expiring in July, this led to a quick contract extension until after Summerslam weekend, which just took place this past week.

Their rivalry came to a conclusion at NXT Takeover 36, where O'Reilly defeated Cole in a Two Out of Three Falls Match.

It has become apparent this was Cole's final appearance in NXT, and with his contract now expired, it is unknown whether he'll stay in WWE and most likely join the main roster on Raw or Smackdown, or leave for most likely AEW.

For the longest time it was thought he would re-sign with the company, and it was reported he had a meeting with Vince McMahon prior to a Smackdown show. It was said the meeting went well, and that McMahon thinks highly of Cole and wishes to retain him.

The greatest NXT superstar of all time! Thank you, Adam Cole! pic.twitter.com/0UqoQDAldY

In that meeting McMahon reportedly pitched several ideas and stories to Cole about what his arrival on the main roster would look like.

Things have changed it seems, with Andrew Zarian of Mat Men Pro Wrestling Podcast saying the optimism has faded.

"With people that I spoke to within WWE, for the longest time the anticipation was that he would re-sign with WWE. Something changed," he said.

"The conversation with Vince McMahon apparently went well. That was a positive conversation at that Smackdown on Friday a couple of weeks ago. I don't know what changed."

As of Yesterday, Adam Cole has still not signed a WWE contract extension.

Adam Cole might consider staying in WWE because he has unfinished business in the company. While Cole has done everything there is to do in NXT in his four years there, he has yet to compete as a member of the main roster.

Alongside this, Cole would have the chance to win championships he has yet to win, including a world title in WWE.

There is the live possibility that Cole makes the jump, as so many have in recent months and signs with All Elite Wrestling.

AEW has been given the reputation of being very wrestler-friendly. So it is no surprise that anyone would want to work there. Adam Cole is wrestling heavy character, so a place like AEW, where wrestling is being prioritised more than entertainment, would be ideal.

If Cole was to stay in WWE, he would be moved to the main roster, a place where a majority of big NXT names have floundered because of the way they are booked.

This rule doesn't apply to NXT superstars however and Cole has been able to constantly stream via his Twitch channel. If he moves to the main roster in WWE he would be seemingly forced to bid farewell to the channel.

Cole addressed this in a stream recently, saying he'll never give up the channel.

"I love y’all so much. I wish so bad that I could just stream for a few more hours. But it does, it makes me so happy to even be able to stream for a little bit," he said.

"And it’s why when I say no matter what, there is a zero chance that this channel is ever going away. I will never give this up. I love it with my whole entire heart. And I love you guys. That’s how important you are to me.

"...there’s been a lot going on lately. I just want to make sure everyone knows that this is going nowhere. This is going absolutely nowhere."

Adam Cole is good friends with AEW wrestlers Matt and Nick Jackson, The Young Bucks, and AEW Champion Kenny Omega. All three also serve as Executive Vice Presidents in AEW. Having your best friends in high positions of a wrestling company would definitely be appealing.

He featured heavily in the spin-off video series "Being The Elite". Once he left for WWE, they "killed" him off.

The Young Bucks, earlier this week teased a potential Adam Cole return by sharing the link to the old video where he "died".

The most important pro to Cole joining AEW would have to be that his long-time girlfriend Britt Baker is there. Baker is AEW Women's Champion and a massive star in AEW.

WWE has a massive travel schedule, and with AEW growing in size and now travelling as well, it could be ideal for the couple to be working the same company.

Parties from both sides have been teasing the situation.

AEW superstar Matt Hardy posted the following to his socials.

#TBT 2014 Lots of buzz on @AdamColePro right now. I’m not surprised at all, he’s one of the elite in this industry. Let’s not forget - The #KingMaker Big Money Matt was his original mentor in ROH, of course he’s gonna be a rock star. pic.twitter.com/JBM6gH51Gw

In CM Punk's two appearances thus far for AEW, eagle eyed fans noticed he had the letters AC written on one shoe and BW on another. People think AC could stand for Adam Cole.

The theory going around is the initials CM Punk wrote on his shoes from Rampage & Dynamite means, AC - Adam Cole
BW - Bray Wyatt
Are they coming to AEW? 🤷🏿‍♂️#CMPunk #AdamCole #BrayWyatt #AEW pic.twitter.com/5Bqh7VF5Y5

Cole could pop-up on any show at any time now which makes all of Raw, Smackdown, Dynamite and Rampage must watch television.