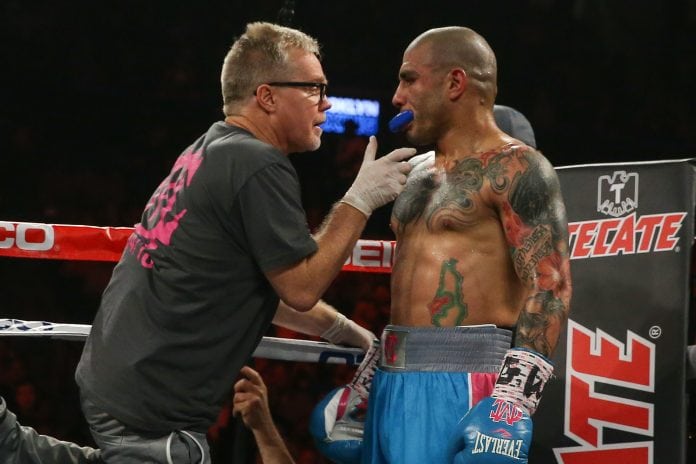 For all the hype, and justified hype at that, behind the Floyd Mayweather/Manny Pacquiao fight, on the day the so called “fight of the century” fell flat.

Mayweather shocked no one by ducking, dodging and refusing to exchange with the bigger punching Filipino.

Pacquiao was unable to corner his much faster opponent and the fight ended up as twelve rounds of the odd exchange followed by Floyd tagging and running.

Going in we all knew what would happen, but the promotion was such that we all gladly handed over our $60+ to be part of the occasion.

Some of those casual boxing fans who watched on that day may not know that there is a true super fight taking place later this month.

On the 21st of November (US time) the WBC World middleweight title will be on the line as Saul "Canelo" Alvarez takes on Miguel "Junito" Cotto.

25 year-old Mexican Alvarez has long been touted as the next undisputed pound-for-pound king of his sport. He brings a professional record of 45-1-1 into the fight.

His only loss to date was a majority decision loss to Floyd Mayweather, and there’d be few who could deny he is a much better fighter now than he was at the time.

He is coming off an absolutely destructive third round knockout over the previously undefeated James Kirkland.

The manner in which he disposed of the brilliant Kirkland would have sent shudders down the spine of Canelo’s future opponents.

Cotto is one of very few boxers on the planet who would have little to no fear stepping into the ring with the new world number one.

Cotto has a record of 40 wins and four losses. He too suffered a loss to Floyd Mayweather, while his other losses came at the hands of genuine superstars Manny Pacquiao, Antonio Margarito and Austin Trout.

His latest fight was a four round clinic over Australian Daniel Geale.

Geale, for his talent and bravery, was never in the fight, and from the opening bell it was not a matter of “if” but when the Aussie would hit the canvas.

Make no mistake, this fight will not sell anywhere near the amount of pay-per-views that the Floyd vs Manny fight, but I am willing to go on record as saying this will be a far better quality fight.

This fight could go twelve rounds, or it could inside the opening round.

Both men are capable of knocking any man on the planet senseless with just one, well placed blow.

Canelo will enter the fight with the physical advantages. As the naturally bigger fighter, he will have a height and reach advantage.

Australian betting agencies have Canelo as the $1.40 favourite with Cotto a $2.80 outsider, however I do expect those odds to shorten as the fight draws near.

It won’t draw the four million plus viewers the other super fight landed, but like the May vs Money event, they will be talking about this fight for years to come.

The fact the winner will be facing the man I believe to be the best in the business right now in Gennady Golovkin, makes this the biggest fight of the year.

To think that in 2016 we will be seeing either Canelo or Cotto vs Golovkin … Perhaps the boxing world has already moved on from the retirement of Floyd Mayweather.

I don’t want to sound like I’m trying to sell this fight, as it sells itself, but this is THE fight you do not want to miss.